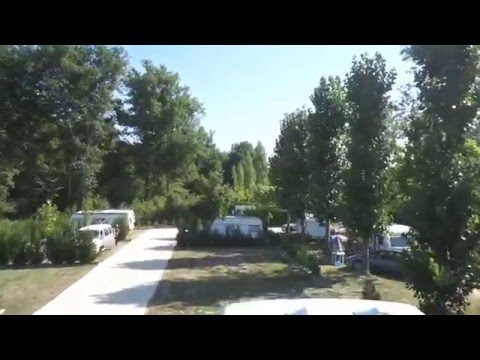 Detail information about this campsite

Stayed for 2 nights on route to Spain - nothing was open on the site reception was closed we had to go in search of someone to check us in - no croissants available from reception. Creole is a nice little town with a large carrefour. Pitches were spacious and divided by neat hedges for privacy.

Toilet and shower area smelly and full of flies when we arrived, pressure washed whilst we were there so improved.
Staff spoke a little English, which I find quite surprising considering the high percentage of English tourists in the area. Not a warm welcome, felt like we were intruding!
We have stayed at much better sites with more facilities for much less.
Swimming pool not open until 11am, the weather was very hot and we would have appreciated access earlier in the day.
Paving around pool breaking up, pieces of mortar rather painful on bare feet. Not enough sun loungers for everyone.
Snack bar and bar only open in the evening, food was very good though.
Bread available to order but you need to collect between 8:30 and 9:00, lets be honest we are all on holiday and we would perhaps like a lie in and a leisurely breakfast so to have such a small window of opportunity to collect seems rather mean.
The road outside was a very busy and although the noise didn\'t bother us it felt quite dangerous if you were walking or cycling along it.
Nearest village a 15 min cycle or 40 min walk.
Bus stop outside the site directly to Bordeaux for 4 euros 20 return.
Overall an ok site but could be so much better with some minor improvements and additional staff.

On arrival at Bel-Air we find the reception to be closed between 12:00 and 14:00. The staff were neither friendly or unfriendly, and spoke little English.

Access to the campsite was via a PIN coded barrier. We were allocated a pitch which was large, grassy, clearly marked with hedges on three sides, and slightly sloping. All of the pitches were much the same, though some sloped more than others.

Despite having a lot of static caravans, the site was attractive and well maintained. Some of the walls, such as for the sanitary block had murals, tastefully done.

The unisex sanitary block was central to the site, and kept clean. No paper or soap were provided and the toilets did not have seats. The lights were motion activated, and kept going off at night, which was a little annoying. There were also a couple of washing machines in the sanitary block, taking tokens at 3,50 euro each (available from reception).

There was a bar/restaurant, 2 pools, mini golf, and a very good games room with tables and chairs, vending machines, fussball, pinball, and a TV. The children's play area looked good, and there were a couple of table tennis tables.

Bread can be ordered from reception, and paid for in advance. It is delivered directly to your pitch in the morning, between 08:15 and 08:30.

WiFi was free, but the signal was very poor (unusable) from the pitch. These days, you expect good coverage on all pitches without having to go to the bar.

The road alongside the campsite can be busy in the morning, but did not concern is too much.

We found this to be a good stopover site, not far from Bordeaux.

we arrived late in the day and it was only a stopover so the review needs to be seen in that context. we had some trouble with the van and the staff kindly organised a mechanic to call who fixed the problem and would'nt charge us! it is a very well maintained site with clean and tidy facilities but i though a bit souless. i was a bit irritated by the fact that the electric hookup was not the euro plug type which they neglected to mention at the time.(the only non euro plug site we encountered in three and a half weeks of travelling). and they didn't have an adapter! they should always have adapters available. an opportunity to keep the customer happy and even maybe make a few euros per night hiring them out or selling them ? i don't think we'll be going back there.

Nice site short bike ride to creon and long one to Bordeaux but bike tracks most of the way. Staff nice and helpful. Clean facilities would visit again.

We used this site as a stopover in early February on our route down to Spain. The Atlantic coast of France at that stage was getting the same storms as back in the UK through Storm Imogen. Much of the fields were flooded and the winds were gale force. The site was obviously not fully open and just the bare necessities were provided. That said the staff were excellent and friendly, the shower blocks were spotless and partially heated. The grass pitches were very wet (as to be expected) but they found us (and others) some hardstandings which were great. Creon is 2 miles away and has a large Carrefour and petrol station. Lots of other shops as well. Will definitely use it again.

** The opening period may vary due to the measures surrounding the coronavirus.

The weather on this campsite

This site is protected by reCAPTCHA and Google: Privacy, general conditions.

Due the coronavirus, many campsites have adjusted their opening dates. The information on this website may therefore be temporarily incorrect.